ECMP operates only on equal cost routes in the Linux routing table.

In this example, the 10.1.1.0/24 route has two possible next hops that have been installed in the routing table:

For routes to be considered equal they must:

As of Cumulus Linux 3.0, the BGP maximum-paths setting is enabled, so multiple routes are installed by default. See the ECMP section of the BGP chapter for more information.

Once multiple routes are installed in the routing table, a hash is used to determine which path a packet follows.

Since the hash is deterministic and always provides the same result for the same input, you can query the hardware and determine the hash result of a given input. This is useful when determining exactly which path a flow takes through a network.

On Cumulus Linux, use the cl-ecmpcalc command to determine a hardware hash result.

In order to use cl-ecmpcalc, all fields that are used in the hash must be provided. This includes ingress interface, layer 3 source IP, layer 3 destination IP, layer 4 source port and layer 4 destination port.

If any field is omitted, cl-ecmpcalc fails.

cl-ecmpcalc can only take input interfaces that can be converted to a single physical port in the port tab file, like the physical switch ports (swp). Virtual interfaces like bridges, bonds, and subinterfaces are not supported.

cl-ecmpcalc is supported only on switches with the Mellanox Spectrum and the Broadcom Maverick, Tomahawk, Trident II+ and Trident IIa chipsets.

When multiple routes are installed in the routing table, each route is assigned to an ECMP bucket. When the ECMP hash is executed the result of the hash determines which bucket gets used.

In the following example, 4 next hops exist. Three different flows are hashed to different hash buckets. Each next hop is assigned to a unique hash bucket. 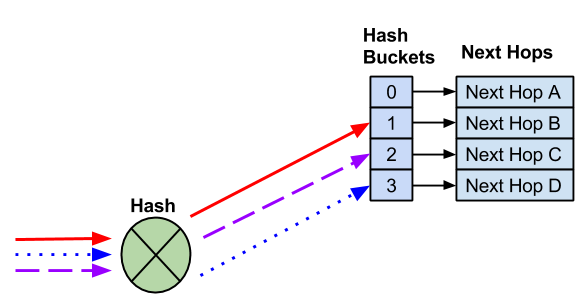 Adding a Next Hop

When a next hop is added, a new hash bucket is created. The assignment of next hops to hash buckets, as well as the hash result, may change when additional next hops are added. 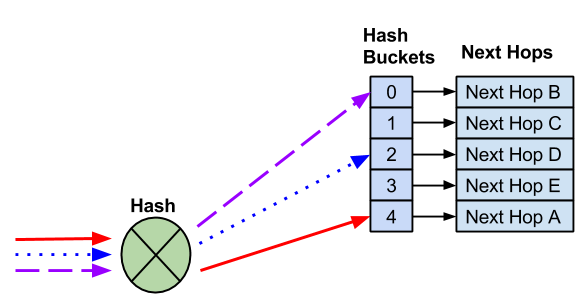 A new next hop is added and a new hash bucket is created. As a result, the hash and hash bucket assignment changed, causing the existing flows to be sent to different next hops.

Removing a Next Hop

When a next hop is removed, the remaining hash bucket assignments may change, again, potentially changing the next hop selected for an existing flow. 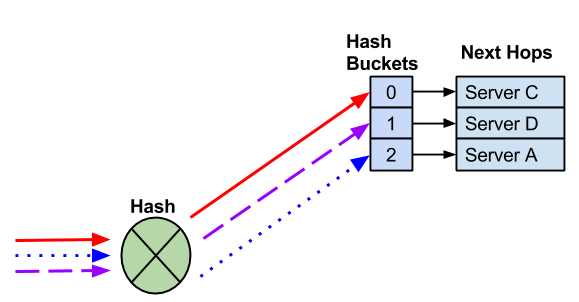 A next hop fails and the next hop and hash bucket are removed. The remaining next hops may be reassigned.

In most cases, the modification of hash buckets has no impact on traffic flows as traffic is being forward to a single end host. In deployments where multiple end hosts are using the same IP address (anycast), resilient hashing must be used.

It is useful to have a unique hash seed for each switch. This helps avoid hash polarization, a type of network congestion that occurs when multiple data flows try to reach a switch using the same switch ports.

The hash seed is set by the ecmp_hash_seed parameter in the /etc/cumulus/datapath/traffic.conf file. It is an integer with a value from 0 to 4294967295. If you don’t specify a value for it, switchd creates a randomly generated seed instead.

To set the hash seed to 50 for example, run the following commands:

These commands create the following configuration in the /etc/cumulus/datapath/traffic.conf file:

In Cumulus Linux, when a next hop fails or is removed from an ECMP pool, the hashing or hash bucket assignment can change. For deployments where there is a need for flows to always use the same next hop, like TCP anycast deployments, this can create session failures.

The ECMP hash performed with resilient hashing is exactly the same as the default hashing mode. Only the method in which next hops are assigned to hash buckets differs.

Resilient hashing is not enabled by default. See below for steps on configuring it.

Resilient hashing is supported only on switches with the Broadcom Tomahawk, Trident II+ and Trident II as well as Mellanox Spectrum chipsets. You can run net show system to determine the chipset.

When resilient hashing is configured, a fixed number of buckets are defined. Next hops are then assigned in round robin fashion to each of those buckets. In this example, 12 buckets are created and four next hops are assigned.

Unlike default ECMP hashing, when a next hop needs to be removed, the number of hash buckets does not change. 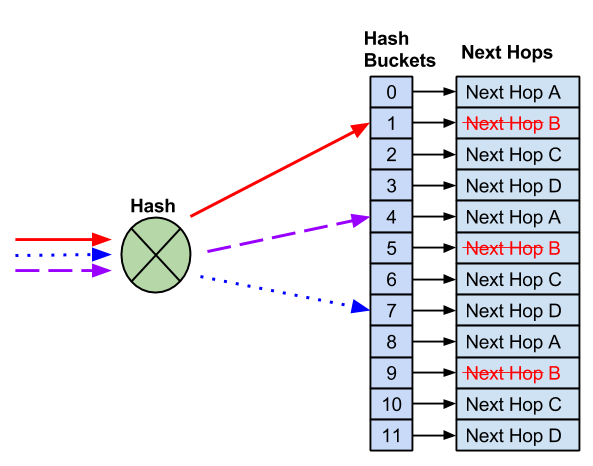 With 12 buckets assigned and four next hops, instead of reducing the number of buckets - which would impact flows to known good hosts - the remaining next hops replace the failed next hop. After the failed next hop is removed, the remaining next hops are installed as replacements. This prevents impact to any flows that hash to working next hops.

Resilient hashing does not prevent possible impact to existing flows when new next hops are added. Due to the fact there are a fixed number of buckets, a new next hop requires reassigning next hops to buckets.

As a result, some flows may hash to new next hops, which can impact anycast deployments.

An ECMP route counts as a single route with multiple next hops. The following example is considered to be a single ECMP route: