This documentation is for the extended support release (ESR) version of Cumulus Linux. We will continue to keep this content up to date until 21 February, 2023, when ESR support ends. For more information about ESR, please read this knowledge base article.

You can configure a traditional mode bridge either using NCLU or manually editing the /etc/network/interfaces file.

Configure a Traditional Bridge with NCLU

NCLU has limited support for configuring bridges in traditional mode.

The traditional bridge must be named something other than bridge, as that name is reserved for the single VLAN-aware bridge that you can configure on the switch.

To configure a traditional mode bridge using NCLU, do the following:

These commands create the following configuration snippet in the /etc/network/interfaces file:

To create a traditional mode bridge manually, you need to hand edit the /etc/network/interfaces file:

You can configure multiple bridges, in order to logically divide a switch into multiple layer 2 domains. This allows for hosts to communicate with other hosts in the same domain, while separating them from hosts in other domains. 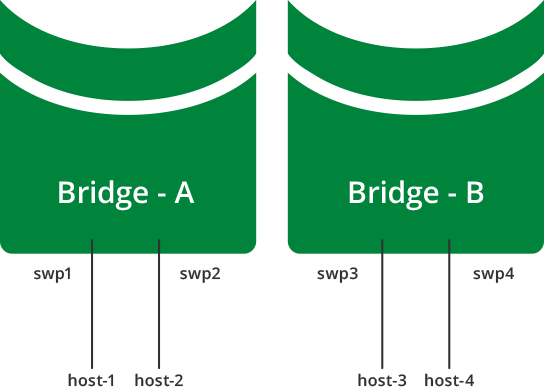 The IEEE standard for trunking is 802.1Q. The 802.1Q specification adds a 4 byte header within the Ethernet frame that identifies the VLAN of which the frame is a member.

802.1Q also identifies an untagged frame as belonging to the native VLAN (most network devices default their native VLAN to 1). The concept of native, non-native, tagged or untagged has generated confusion due to mixed terminology and vendor-specific implementations. Some clarification is in order:

These commands create the following configuration snippet in the /etc/network/interfaces file:

Cumulus Linux does not often interact directly with end systems as much as end systems interact with one another. Thus, after a successful address resolution protocol (ARP) places a neighbor into a reachable state, Cumulus Linux may not interact with the client again for a long enough period of time for the neighbor to move into a stale state. To keep neighbors in the reachable state, Cumulus Linux includes a background process (/usr/bin/neighmgrd) that tracks neighbors that move into a stale, delay or probe state, and attempts to refresh their state ahead of any removal from the Linux kernel, and thus before it would be removed from the hardware forwarding.

The ARP refresh timer defaults to 1080 seconds (18 minutes). You can change this setting by following the procedures outlined in Address Resolution Protocol - ARP.

To work around this issue, add a VXLAN on the bridge so that it does not require a real tunnel IP address.