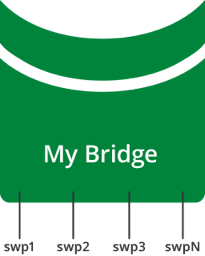 The following example output shows a MAC address table for the bridge:

By default, Cumulus Linux stores MAC addresses in the Ethernet switching table for 1800 seconds (30 minutes). To change the amount of time MAC addresses are stored in the table, configure bridge ageing.

Edit the /etc/network/interfaces file and add bridge-ageing to the bridge stanza.

Bridges can be included as part of a routing topology after being assigned an IP address. This enables hosts within the bridge to communicate with other hosts outside of the bridge through a switch VLAN interface (SVI), which provides layer 3 routing. The IP address of the bridge is typically from the same subnet as the member hosts of the bridge.

When you add an interface to a bridge, it ceases to function as a router interface and the IP address on the interface becomes unreachable.

To configure the SVI:

Edit the /etc/network/interfaces file to add the interfaces and VLAN ID you want to use. The following configures an SVI using swp1 and swp2, and VLAN ID 10. The bridge-vlan-aware parameter associates the SVI with the VLAN-aware bridge.

When you configure a switch initially, all southbound bridge ports might be down; therefore, by default, the SVI is also down. You can force the SVI to always be up by disabling interface state tracking, which leaves the SVI in the UP state always, even if all member ports are down. Other implementations describe this feature as no autostate. This is beneficial if you want to perform connectivity testing.

Consider the following configuration, without a dummy interface in the bridge:

With this configuration, when swp3 is down, the SVI is also down:

Now add the dummy interface to your network configuration:

Now, even when swp3 is down, both the dummy interface and the bridge remain up:

To disable automatic address generation for a regular IPv6 address on a VLAN:

Edit the /etc/network/interfaces file and add the line ipv6-addrgen off to the VLAN stanza. The following example disables automatic address generation for a regular IPv6 address on VLAN 100.

To reenable automatic link-local address generation for a VLAN: