Redistribute neighbor provides a mechanism for IP subnets to span racks without forcing the end hosts to run a routing protocol.

In the case of a leaf switch, where the default gateway is deployed for hosts within the rack, the ARP cache table contains a list of all hosts that have ARP’d for their default gateway. In many scenarios, this table contains all the layer 3 information that is needed. This is where redistribute neighbor comes in, as it is a mechanism of formatting and syncing this table into the routing protocol.

The current release of redistribute neighbor: 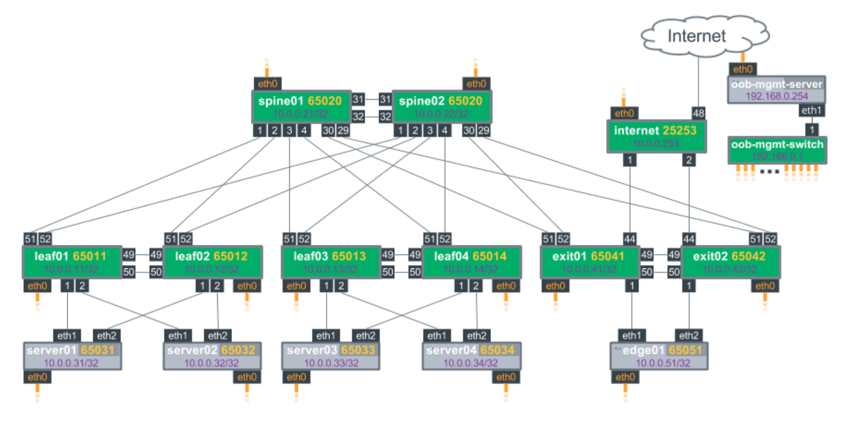 The following steps demonstrate how to configure leaf01, but you can follow the same steps on any of the leafs.

The NCLU and vtysh commands save the configuration in the /etc/frr/frr.conf file. The following example uses OSPF as the routing protocol:

Additionally, install and use ifplugd. ifplugd modifies the behavior of the Linux routing table when an interface undergoes a link transition (carrier up/down). The Linux kernel by default leaves routes up even when the physical interface is unavailable (NO-CARRIER).

After you install ifplugd, edit /etc/default/ifplugd as follows, where eth1 and eth2 are the interface names that your host uses to connect to the leaves.

This feature adds each ARP entry as a /32 host route into the routing table of all switches within a summarization domain. Take care to keep the number of hosts minus fabric routes under the TCAM size of the switch. Review the Cumulus Networks datasheets for up to date scalability limits of your chosen hardware platforms. If in doubt, contact your Cumulus Linux support representative.

How do I determine if rdnbrd (the redistribute neighbor daemon) is running?

How do I change the default configuration of rdnbrd?

How do I determine that the /32 redistribute neighbor routes are being advertised to my neighbor?

How do I verify that the kernel routing table is being correctly populated?

Use the following workflow to verify that the kernel routing table isbeing populated correctly and that routes are being correctly imported/advertised: