For traditional Linux bridges, the kernel supports VLANs in the form of VLAN subinterfaces. Enabling bridging on multiple VLANs means configuring a bridge for each VLAN and, for each member port on a bridge, creating one or more VLAN subinterfaces out of that port. This mode can pose scalability challenges with configuration size as well as boot time and run time state management, when the number of ports times the number of VLANs becomes large.

The following examples show how to create a simple traditional mode bridge configuration on the switch. The example uses some optional elements:

The standard for trunking is 802.1Q. The 802.1Q specification adds a four byte header within the Ethernet frame that identifies the VLAN of which the frame is a member.

802.1Q also identifies an untagged frame as belonging to the native VLAN (most network devices default their native VLAN to 1). In Cumulus Linux:

A bridge in traditional mode has no concept of trunks, just tagged or untagged frames. With a trunk of 200 VLANs, there would need to be 199 bridges, each containing a tagged physical interface, and one bridge containing the native untagged VLAN. 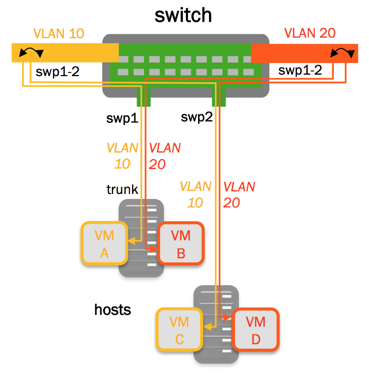