Cumulus Linux provides the option of using VRR or VRRP.

You cannot configure both VRR and VRRP on the same switch.

The diagram below illustrates a basic VRR-enabled network configuration.

The routers implement the layer 2 network interconnecting the hosts and the redundant routers. To configure the routers, add a bridge with the following interfaces to each router:

Cumulus Linux only supports VRR on an SVI. You cannot configure VRR on a physical interface or virtual subinterface.

Use the same commands for IPV6 addresses; for example:

Configure the links between the hosts and the routers in active-active mode for FHRP.

The following example creates an MLAG configuration that incorporates VRR.

VRRP allows two or more network devices in an active standby configuration to share a single virtual default gateway. The VRRP router that forwards packets at any given time is the master. If this VRRP router fails, another VRRP standby router automatically takes over as master. The master sends VRRP advertisements to other VRRP routers in the same virtual router group, which include the priority and state of the master. VRRP router priority determines the role that each virtual router plays and who becomes the new master if the master fails.

All virtual routers use 00:00:5E:00:01:XX for IPv4 gateways or 00:00:5E:00:02:XX for IPv6 gateways as their MAC address. The last byte of the address is the Virtual Router IDentifier (VRID), which is different for each virtual router in the network. Only one physical router uses this MAC address at a time. The router replies with this address when it receives ARP requests or neighbor solicitation packets for the IP addresses of the virtual router. 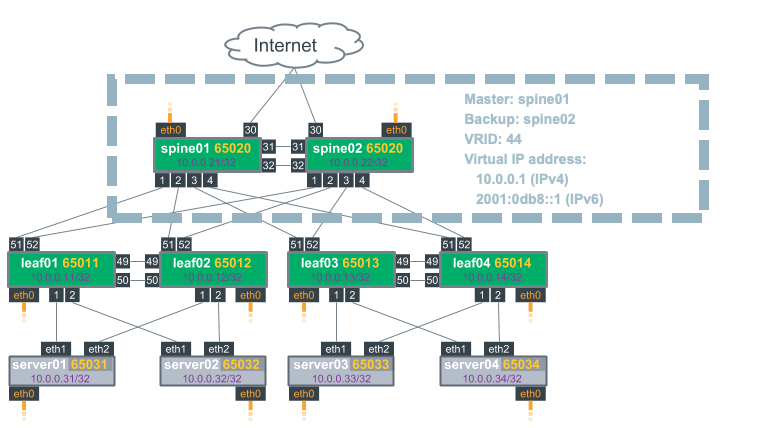 To configure VRRP, specify the following information on each switch:

You can also set these optional parameters:

The parent interface must use a primary address as the source address on VRRP advertisement packets.

The vtysh commands save the configuration in the /etc/network/interfaces file and the /etc/frr/frr.conf file. For example: