When FRR learns about a local VNI and there is no explicit configuration for that VNI in FRR, the switch derives the RD and import and export RTs for this VNI automatically. The RD uses RouterId:VNI-Index and the import and export RTs use AS:VNI. For routes that come from a layer 2 VNI (type-2 and type-3), the RD uses the VXLAN local tunnel IP address (vxlan-local-tunnelip) from the layer 2 VNI interface instead of the RouterId (vxlan-local-tunnelip:VNI). EVPN route exchange uses the RD and RTs.

The RD disambiguates EVPN routes in different VNIs (they can have the same MAC and IP address) while the RTs describe the VPN membership for the route. The VNI-Index for the RD is a unique number that the switch generates. It only has local significance; on remote switches, its only role is for route disambiguation. The switch uses this number instead of the VNI value itself because this number has to be less than or equal to 65535. In the RT, the AS is always a 2-byte value to allow room for a large VNI. If the router has a 4-byte AS, it only uses the lower 2 bytes. This ensures a unique RT for different VNIs while having the same RT for the same VNI across routers in the same AS.

For eBGP EVPN peering, the peers are in a different AS so using an automatic RT of AS:VNI does not work for route import. Therefore, Cumulus Linux treats the import RT as *:VNI to determine which received routes apply to a particular VNI. This only applies when the switch auto-derives the import RT.

If you do not want to derive RDs and RTs automatically, you can define them manually. The following example commands are per VNI.

The vtysh commands create the following configuration snippet in the /etc/frr/frr.conf file.

Enable EVPN in an iBGP Environment with an OSPF Underlay

You can use EVPN with an OSPF or static route underlay. This is a more complex configuration than using eBGP. In this case, iBGP advertises EVPN routes directly between VTEPs and the spines are unaware of EVPN or BGP.

The leafs peer with each other in a full mesh within the EVPN address family without using route reflectors. The leafs generally peer to their loopback addresses, which advertise in OSPF. The receiving VTEP imports routes into a specific VNI with a matching route target community.

After you run nv config save, the NVUE commands create the following configuration snippet in the /etc/nvue.d/startup.yaml file:

The vtysh commands create the following configuration snippet in the /etc/frr/frr.conf file.

ARP and ND suppression only suppresses the flooding of known hosts. To disable all flooding refer to the Disable BUM Flooding section.

In a centralized routing deployment, you must configure layer 3 interfaces even if you configure the switch only for layer 2 (you are not using VXLAN routing). To avoid installing unnecessary layer 3 information, you can turn off IP forwarding.

The following example commands turn off IPv4 and IPv6 forwarding on VLAN 10 and VLAN 20.

When deploying EVPN and VXLAN using a hardware profile other than the default Forwarding Table Profile, ensure that the Linux kernel ARP sysctl settings gc_thresh2 and gc_thresh3 both have a value larger than the number of neighbor (ARP and ND) entries you expect in the deployment. To configure these settings, edit the /etc/sysctl.d/neigh.conf file, then reboot the switch. If your network has more hosts than the values in the example below, change the sysctl entries accordingly.

Edit the /etc/network/interfaces file to set bridge-arp-nd-suppress off on the VNI, then run the ifreload -a command.

Cumulus Linux does not provide NVUE commands for this configuration.

Edit the /etc/network/interfaces file. For example:

It is common to subdivide the data center into multiple pods with full host mobility within a pod but only do prefix-based routing across pods. You can achieve this by only exchanging EVPN type-5 routes across pods.

You must apply the route map for the configuration to take effect. See Route Maps for more information.

In many situations, it is also desirable to only exchange EVPN routes carrying a particular VXLAN ID. For example, if data centers or pods within a data center only share certain tenants, you can use a route map to control the EVPN routes exchanged based on the VNI.

The following example configures a route map that only advertises EVPN routes from VNI 1000:

You can only match type-2 and type-5 routes based on VNI.

To advertise all SVI IP and MAC addresses on the switch, run these commands:

To advertise a specific SVI IP/MAC address, run these commands:

The vtysh commands save the configuration in the /etc/frr/frr.conf file. For example:

You can disable BUM flooding over VXLAN tunnels so that EVPN does not advertise type-3 routes for each local VNI and stops taking action on received type-3 routes.

Disabling BUM flooding is useful in a deployment with a controller or orchestrator, where the switch is pre-provisioned and there is no need to flood any ARP, NS, or DHCP packets.

For information on EVPN BUM flooding with PIM, refer to EVPN BUM Traffic with PIM-SM.

The vtysh commands save the configuration in the /etc/frr/frr.conf file. For example:

Cumulus Linux can detect duplicate MAC and IPv4 or IPv6 addresses on hosts or virtual machines in a VXLAN-EVPN configuration. The Cumulus Linux switch (VTEP) considers a host MAC or IP address to be duplicate if the address moves across the network more than a certain number of times within a certain number of seconds (five moves within 180 seconds by default). In addition to legitimate host or VM mobility scenarios, address movement can occur when you configure IP addresses incorrectly on a host or when packet looping occurs in the network due to faulty configuration or behavior.

When Does Duplicate Address Detection Trigger?

The following illustration shows VTEP-A, VTEP-B, and VTEP-C in an EVPN configuration. Duplicate address detection triggers on VTEP-A when there is a duplicate MAC address for two hosts attached to VTEP-A and VTEP-B. However, duplicate detection does not trigger on VTEP-A when mobility events occur between two remote VTEPs (VTEP-B and VTEP-C). 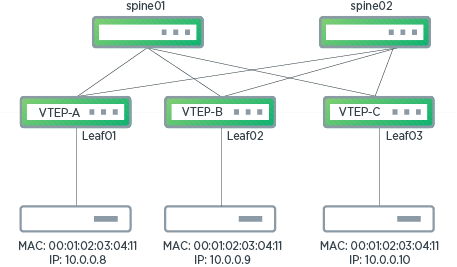 The following example command sets the maximum number of address moves allowed to 10 and the duplicate address detection time interval to 1200 seconds.

The following example shows the syslog message that generates when Cumulus Linux detects a MAC address as a duplicate during a local update:

The following example shows the syslog message that generates when Cumulus Linux detects an IP address as a duplicate during a remote update:

Cumulus Linux provides a freeze option that takes action on a detected duplicate address. You can freeze the address permanently (until you intervene) or for a defined amount of time, after which it clears automatically.

When you enable the freeze option and the switch detects a duplicate address:

If you run the clear command or the timer expires before you address the fault, duplicate address detection can continue to occur.

After you clear a frozen address, if it is present behind a remote VTEP, the kernel and hardware forwarding tables update. If this VTEP learns the address locally, the address advertises to remote VTEPs. All VTEPs get the correct address as soon as the host communicates. The switch only learns silent hosts after the faulty entries age out, or you intervene and clear the faulty MAC and ARP table entries.

You can enable Cumulus Linux to freeze detected duplicate addresses. The duration can be any number of seconds between 30 and 3600.

The following example command freezes duplicate addresses for a period of 1000 seconds, after which it clears automatically:

You can clear a duplicate MAC or IP address (and unfreeze a frozen address). The following example command clears IP address 10.0.0.9 for VNI 101.

You cannot run NVUE commands to clear a duplicate MAC or IP address.

To clear duplicate addresses for all VNIs, run the following command:

During the duplicate address detection process, you can see the start time and current detection count with the vtysh show evpn mac vni <vni_id> mac <mac_addr> command. The following command example shows that detection starts for MAC address 00:01:02:03:04:11 for VNI 1001 on Tuesday, Nov 6 at 18:55:05 and Cumulus Linux detects one move.