The NVUE object model definition uses the OpenAPI specification (OAS). Similar to YANG (RFC 6020 and RFC 7950), OAS is a data definition, manipulation, and modeling language (DML) that lets you build model-driven interfaces for both humans and machines. Although the computer networking and telecommunications industry commonly uses YANG (standardized by IETF) as a DML, the adoption of OpenAPI is broader, spanning cloud to compute to storage to IoT and even social media. The OpenAPI Initiative (OAI) consortium leads OpenAPI standardization, a chartered project under the Linux Foundation.

The OAS schema forms the management plane model with which you configure, monitor, and manage the Cumulus Linux switch. The v3.0.2 version of OAS defines the NVUE data model.

Like other systems that use OpenAPI, the NVUE OAS schema defines the endpoints (paths) exposed as RESTful APIs. With these REST APIs, you can perform various create, retrieve, update, delete, and eXecute (CRUDX) operations. The OAS schema also describes the API inputs and outputs (data models).

You can use the NVUE object model in these two ways:

NVUE follows a declarative model, removing context-specific commands and settings. It is structured as a big tree that represents the entire state of a Cumulus Linux instance. At the base of the tree are high level branches representing objects, such as router and interface. Under each of these branches are further branches. As you navigate through the tree, you gain a more specific context. At the leaves of the tree are actual attributes, represented as key-value pairs. The path through the tree is similar to a filesystem path. 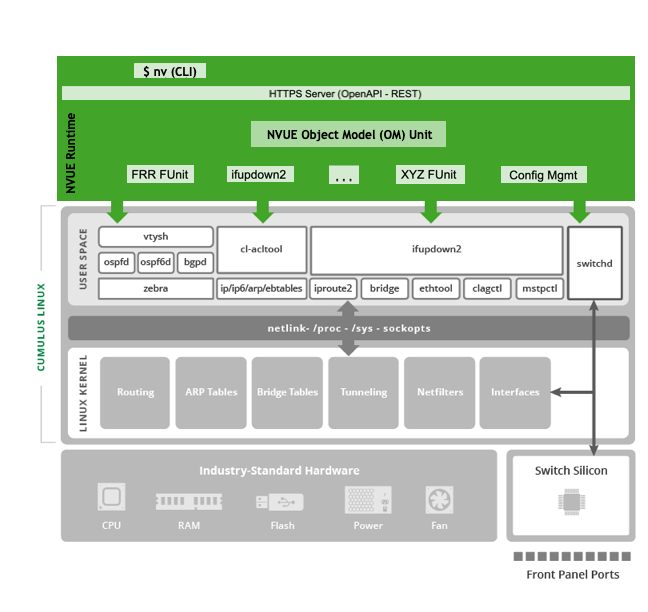