You can use this Production Ready Automation package as a learning resource and as a starting template to implement these features, technologies and operational workflows in your Cumulus Linux network environments.

The NVIDIA reference topology provides a common and consistent preconfigured spine and leaf base network topology, which serves as the basis for all supported NVIDIA demos and golden standards. This reference topology is a blank slate with minimal configuration to prepare the simulation to receive additional deployment and provisioning that demonstrates a feature or represents a fully operational production network.

The NVIDIA reference topology provides a complete two-tier spine and leaf topology. It also includes a complete out-of-band management. The devices include: 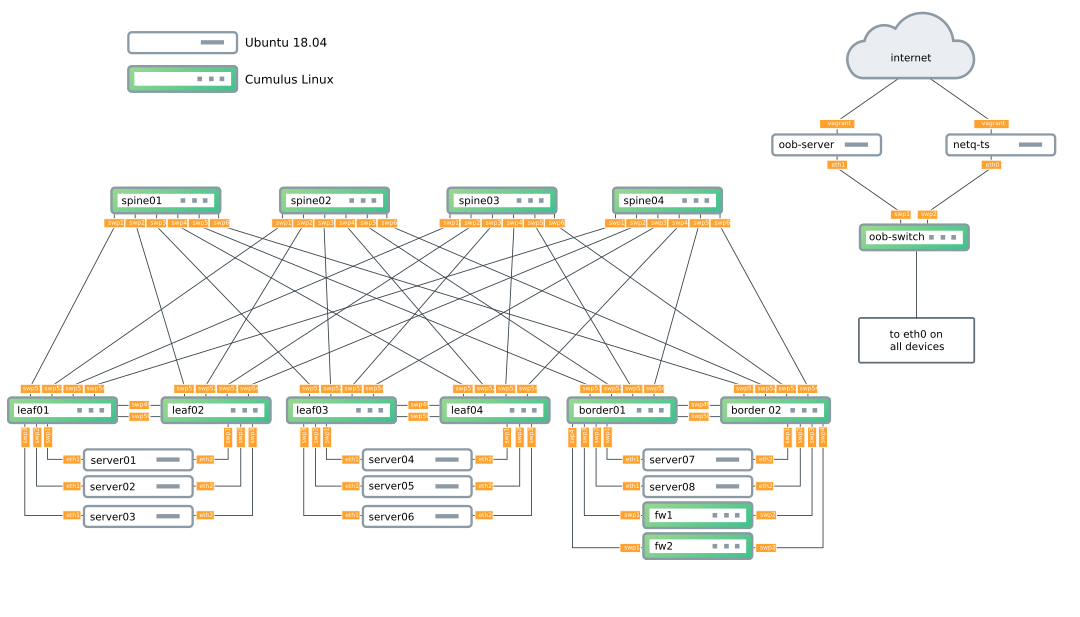 When you start the reference topology simulation environment, all interfaces (except for the out-of-band management network) are not configured and are administratively down. The golden standard configurations and demos provide interface and routing protocol configurations that you apply to this simulation topology.

Every officially supported Cumulus Linux demo includes the NVIDIA reference topology. To see a full example of the Production Ready Automation, use one of the EVPN-VXLAN golden standard demos.

NVIDIA currently provides three officially supported demo solutions to overlay and provision the reference topology. These demos are EVPN-VXLAN environments and each performs tenant routing in a different style.

The golden standard demos and the underlying base reference topology are officially hosted on GitLab in the Golden Turtle folder of the Cumulus Consulting GitLab group.

For more detailed information about IP addressing and included features, refer to the README page of the demo.

The Production Ready Automation package contains examples of best practice Ansible automation and infrastructure as code (IaC). It uses a completely stock Ansible core installation without any vendor specific or third-party plugins. Examples of Ansible best practices using roles, highly granular templates, and structured variables represent how you can store your network configurations as a highly scalable version of infrastructure as code. It is that base code that the automation engine renders to produce the final configurations that exist on the network devices.

As network operations become more programmatic and automated, and in combination with a robust simulation platform, CI/CD and DevOps style workflows are supplanting legacy workflows. You can test configuration changes automatically in a simulated environment to allow for more rapid and robust change management workflows. The Production Ready Automation package provides an example CI/CD pipeline implemented on GitLab with the CI network testing and validation powered by Cumulus NetQ.