This article describes PIM network elements and PIM messages, and provides an overview of the PIM-SM configuration options, ASM and SSM. For information on configuring PIM, refer to Protocol Independent Multicast - PIM

Multicast routing behaves differently depending on whether the source sends before receivers request the multicast stream, or if a receiver tries to join a stream before there are any sources. 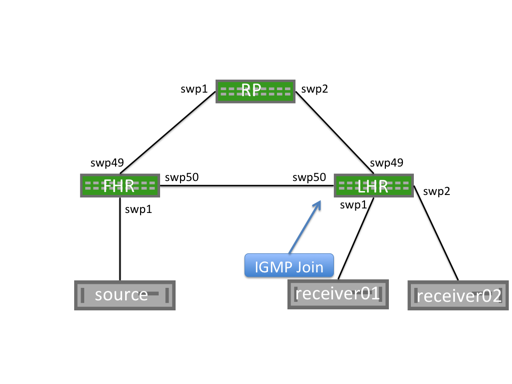 This creates a (*,G) mroute with an OIF of the interface that receives the IGMP Membership Report and an IIF of the RPF interface for the RP. 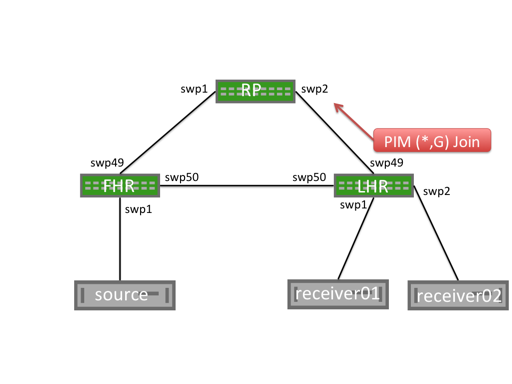 When a first hop router (FHR) receives a multicast data packet from a source, the FHR does not know if there are any interested multicast receivers in the network. The FHR encapsulates the data packet in a unicast PIM register message. The FHR is the source of this packet and the RP address is the destination. The RP builds an (S,G) mroute, decapsulates the multicast packet, and forwards it along the (*,G) tree.

As the unencapsulated multicast packet travels down the (*,G) tree towards the interested receivers, at the same time, the RP sends a PIM (S,G) join towards the FHR. This builds an (S,G) state on each multicast router between the RP and FHR.

When the FHR receives a PIM (S,G) join, it continues encapsulating and sending PIM register messages, but also makes a copy of the packet and sends it along the (S,G) mroute.

The RP then receives the multicast packet along the (S,G) tree and sends a PIM register stop to the FHR to end the register process.

A multicast sender can send multicast data without any additional IGMP or PIM signaling. When the FHR receives the multicast traffic, it encapsulates it and sends a PIM register to the rendezvous point (RP).

When the RP receives the PIM register, it builds an (S,G) mroute; however, there is no (*,G) mroute and no interested receivers.

Receiving a PIM register stop without any associated PIM joins leaves the FHR without any outgoing interfaces. The FHR drops this multicast traffic until a PIM join is received.

Cumulus Linux sends PIM register messages from the interface that receives the multicast traffic to the RP address.

To notify the RP that multicast traffic is still flowing when the RP has no receiver, or if the RP is not on the SPT tree, the FHR periodically sends PIM null register messages. The FHR sends a PIM register with the Null-Register flag set, but without any data. This special PIM register notifies the RP that a multicast source is still sending, in case any new receivers come online.

After receiving a PIM Null-Register, the RP sends a PIM register stop to acknowledge that it receives the PIM null register message.

When a receiver sends an IGMPv3 Join with the source defined, the LHR builds an S,G entry and sends a PIM S,G join to the PIM neighbor closest to the source, according to the routing table. The full path between LHR and FHR contains an S,G state, although no multicast traffic is flowing. Periodic IGMPv3 joins between the receiver and LHR, as well as PIM S,G joins between PIM neighbors, maintain this state. When the sender starts sending traffic, it flows over the pre-built SPT from the sender to the receiver.

In SSM when a sender starts sending traffic, the FHR does not have any existing mroutes. The traffic drops and nothing further happens until a receiver joins. SSM does not rely on an RP and there is no PIM Register process.

Differences Between ASM and SSM

SSM differs from ASM multicast in the following ways: