A link aggregation group (LAG) is used for extending the bandwidth from a single link to multiple links and provide redundancy in case of link failure. Extending the implementation of the LAG to more than a single device provides yet another level of redundancy that extends from the link level to the node level. This extrapolation of the LAG from single to multiple switches is referred to as multi-chassis link aggregation (MLAG). MLAG is supported on Ethernet blades’ internal as well as external ports.

Each switch configuration is independent and it is user responsibility to make sure to configure both switches similarly pertaining MLAG (e.g. MLAG port-channel VLAN membership, static MAC, ACL, etc).

A peered device (host or switch) connecting to switches running an MLAG runs a standard LAG and is unaware of the fact that the LAG connects to two separate switches.

The MLAG switches share an inter-peer link (IPL) between them for carrying control messages in a steady state or data packages in failure scenarios. Thus, the bandwidth of the IPL should be defined accordingly. The IPL itself can be a LAG and may be constructed of links of any supported speed. In such a case, PFC must be configured on this IPL. The figure in section ”Configuring MLAG” illustrates this. The IPL serves the following purposes:

The IPL VLAN interface must be used only for MLAG protocol and must not be used by any other interfaces (e.g. LAG, Ethernet).

Ports 21 and 22 are dedicated IPL ports for MLAG protocol on the SH2200 switch system.

The MLAG protocol is made up of the following components to be expanded later:

When positioned at the top of rack (ToR) and connecting with a Layer-3 uplink, the MLAG pair acts as the L3 border for the hosts connected to it. To allow default gateway redundancy, both MLAG switches should be addressed by the host via the same default gateway address.

MLAG uses an IP address (VIP) that points to all MLAG member nodes.

When running MLAG as L2/L3 border point, an MAGP VIP must be deployed as the default GW for MLAG port-channels (MPOs).

When MLAG is connected through a Layer-2 based uplink, there is no need to apply default gateway redundancy towards hosts since this function is implemented on the L2/L3 border points of the network. For more information, refer to the “MAGP” page.

The two peer switches need to carry the exact same configuration of the MLAG attributes for guaranteeing proper functionality of the MLAG.

Ensuring that both switches are configured identically is the responsibility of the user and is not monitored by the OS.

MLAG is currently supported for 2 switches only.

The VIP address must be on the same management IP subnet.

All nodes in an MLAG must be of the same CPU type (e.g. x86), switch type, and must all have the same OS version installed.

When working with MLAG, the maximum number of MAC addresses is limited to 88K. Without it, there is no limitation.

When transitioning from standalone into a group or vice versa, a few seconds are required for the node state to stabilize. During that time, group feature commands (e.g. MLAG commands) should not be executed. To run group features, wait for the CLI prompt to turn into [standalone:master], [<group>:master] or [<group>:standby] instead of [standalone:*unknown*] or [<group>:*unknown*].

Each MLAG VIP group must be configured with a different unicast IP address. If not, MLAG behavior is inconsistent.

In a scenario where there is no IP communication between the MGMT ports of the MLAG switches (for example when one MGMT port is disconnected), the following CLI prompt is displayed: <hostname>[<mlag cluster name>:unknown]#. This does not reflect the MLAG state, but only the state of the cluster.

It is recommended to configure IPL interface VLAN MTU to 9K.

Master election in MLAG is based on the IPs of the nodes taking part of the MLAG. The master elected is that which has the highest IPL VLAN interface local IP address.

To avoid a scenario where failure on the IPL causes both MLAG peers to assume that their peer has failed, a safety mechanism is maintained based on UDP packets running via the management plane which alerts both MLAG switches that its peer is alive. In such case where keepalive packets are not received the slave shuts down its MLAG interfaces and the master becomes a standalone switch in order to avoid misalignment in MLAG configuration.

The virtual system MAC is automatically computed based on the MLAG VIP name, but can be manually set using the command “system-mac”.

MLAG relies on systems to have the same virtual system MAC. Therefore, if a system MAC mismatch is detected, the slave shuts down its interfaces.

Switches in the same MLAG group must have the same OS version.

When peers identify having different versions, they enter an upgrading state in which the slave peer waits for a specific period of time (according to the command “upgrade-timeout”) before closing its ports.

It is advised to plan MLAG upgrade in advance and perform it in a timely manner. Please avoid performing topology changes during the upgrade period.

When two tiers of MLAG pairs are used, each pair should be upgraded sequentially and not in parallel to prevent traffic loops.

MLAG inter-operates with all STP modes (RSTP, MSTP and PVRST). MLAG can be configured in a spanning tree network where the two MLAG switches function as one STP entity.

In general all static configuration must be configured identically on both peers.

Mellanox Onyx cannot route between the two MLAG switches. That is, the source and the client cannot be connected to MPOs at the same time (only one at a time).

For cases when we need to redirect the traffic, another physical link is needed which is not part of the IPL (preferably a router port) to connect the two switches.

Dynamic routing protocols (e.g. OSPF, BGP) are not supported over MPOs. If they are necessary, router ports must be used instead of MPOs.

This section provides a basic example of how to configure two switches and a server in an MLAG setup. 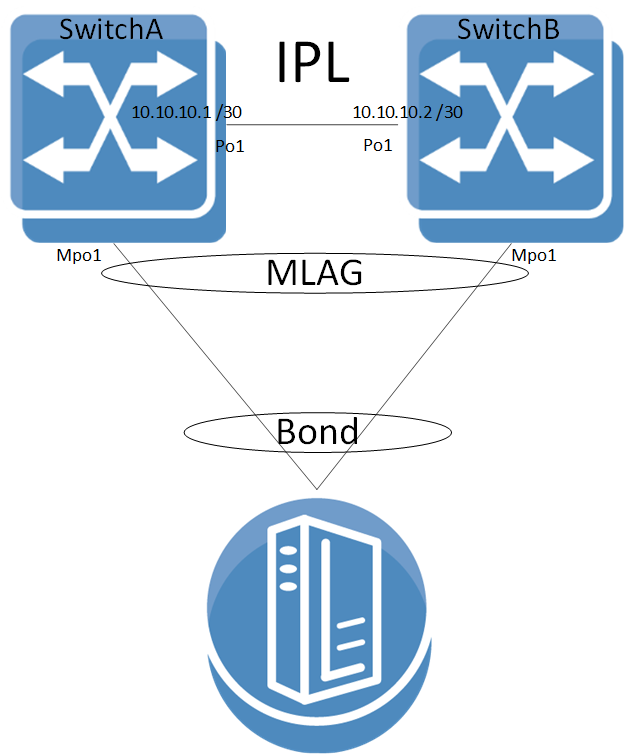 Additional Reading and Use Cases

For more information about this feature and its potential applications, please refer to the following Mellanox Community posts: