In this document we will demonstrate a deployment procedure of RDMA accelerated applications running in Docker containers over NVIDIA end-to-end 100 Gb/s InfiniBand (IB) solution.

We use Ubuntu 16.04.6 LTS as host OS and install latest Docker CE (how-to install guide). We show how to update and install the NVIDIA software and hardware components on host and on Docker container.

For network communication each Docker has 2 devices: 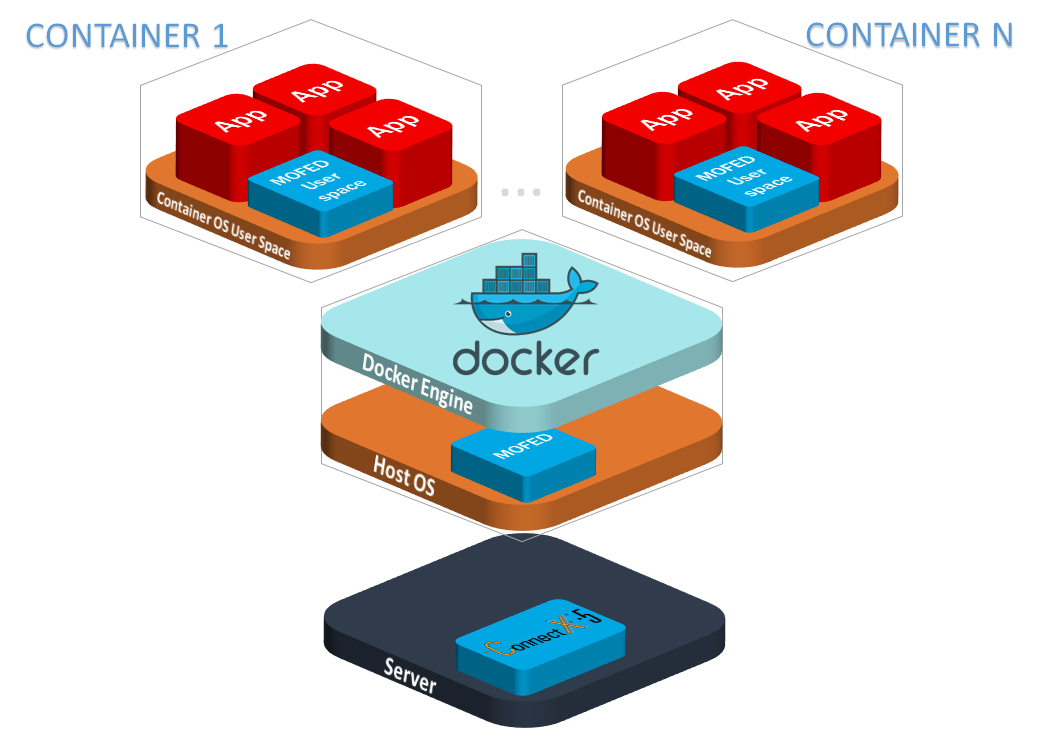 In our reference we'll wire 1st port to InfiniBand switch and will not use a 2nd port.

The will use in our install setup 4 servers.

Each servers will connected to the SB7700 switch by a 100Gb/s IB copper cable. The switch port connectivity in our case is as follow:

To update/upgrade Ubuntu software packages, run the commands below.

Enable the Subnet Manager(SM) on the IB Switch

Refer to the MLNX-OS User Manual to become familiar with switch software (located at support.mellanox.com ).
Before starting to use of the NVIDIA switch, we recommend that you upgrade the switch to the latest MLNX-OS version.

There are three options to select the best place to locate the SM:

We'll explain options 1 and 2 only

Option 1: Configuring the SM on a Switch MLNX-OS® all NVIDIA switch systems.
To enable the SM on one of the managed switches follow the next steps.

To save the configuration (permanently), run:

Option 2: Configuring the SM on a Server ( Skip this procedure if you enable SM on switch)

To start up OpenSM on a server, simply run opensm from the command line on your management node by typing:

Start OpenSM automatically on the head node by editing the /etc/opensm/opensm.conf file.

Create a configuration file by running:

Upon initial installation, OpenSM is configured and running with a default routing algorithm. When running a multi-tier fat-tree cluster, it is recommended to change the following options to create the most efficient routing algorithm delivering the highest performance:

For full details on other configurable attributes of OpenSM, see the “OpenSM – Subnet Manager” chapter of the NVIDIA OFED for Linux User Manual.

Installation NVIDIA OFED for Ubuntu on a Host

MLNX_OFED is installed by running the mlnxofedinstall script. The installation script, performs the following:

The installation script removes all previously installed NVIDIA OFED packages and re-installs from scratch. You will be prompted to acknowledge the deletion of the old packages.

It’s OK if apt-get reports that none of these packages are installed.

The contents of /var/lib/docker/, including images, containers, volumes, and networks, are preserved.

For Ubuntu 16.04 and higher, the Linux kernel includes support for OverlayFS, and Docker CE will use the overlay2 storage driver by default.

Before you install Docker CE for the first time on a new host machine, you need to set up the Docker repository. Afterward, you can install and update Docker from the repository.

Set Up the repository

Install the latest version of Docker CE, or go to the next step to install a specific version. Any existing installation of Docker is replaced.

The recommended way to configure the Docker daemon is to use the daemon.json file, which is located in /etc/docker/ on Linux. If the file does not exist, create it. You can specify one or more of the following settings to configure the default bridge network

The same options are presented as flags to dockerd , with an explanation for each:

Restart Docker after making changes to the daemon.json file.

Set communicating to the outside world

For security reasons, Docker configures the iptables rules to prevent containers from forwarding traffic from outside the host machine, on Linux hosts. Docker sets the default policy of the FORWARD chain to DROP.

To override this default behavior you can manually change the default policy:

Add routing for containers network on another hosts:

Give your environment a quick test run to make sure you’re all set up:

Create or pull a base image and run Container

Docker can build images automatically by reading the instructions from a Dockerfile.

A Dockerfile is a text document that contains all the commands a user could call on the command line to assemble an image.

Docker Image and run a container

In this way you can run Bandwidth stress over IB between containers.