The deployment will be provisioned on top of Network accelerated and GPU enabled Kubernetes cluster over NVIDIA Mellanox end-to-end 25 Gb/s Ethernet solution.

In this document we will go through the following processes: 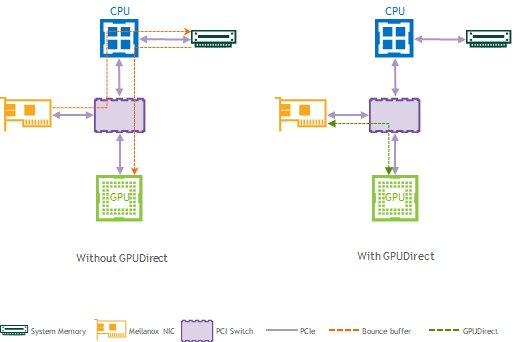 There are multiple ways to deploy Spark and Spark Rapids Plugin. Standalone Mode, Local Mode (for development and testing only, not production), on a YARN cluster (see this link for more details), and on a Kubernetes cluster which is the method used in this deployment guide. The following hardware setup is utilized in the distributed Spark/K8s configuration described in this guide: 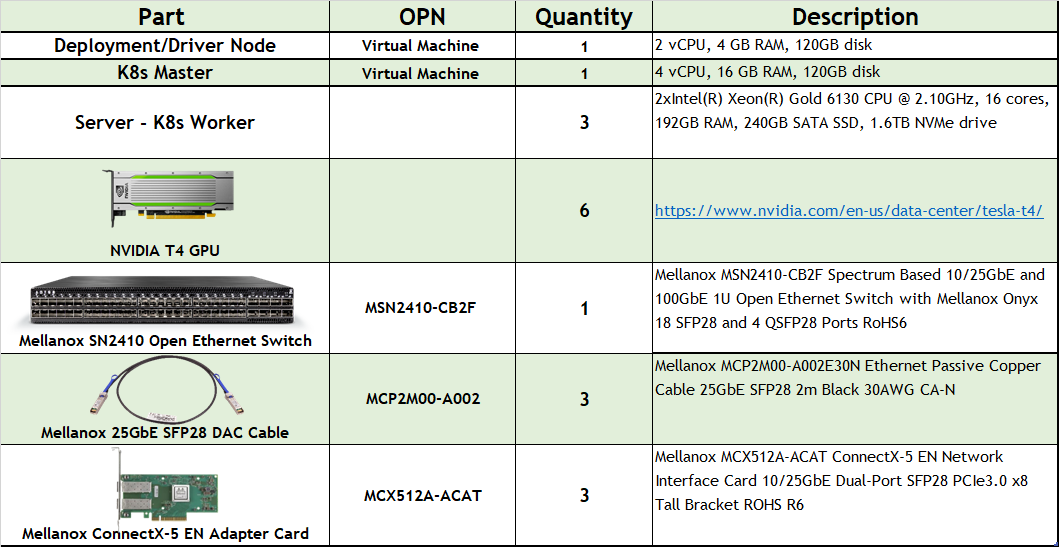 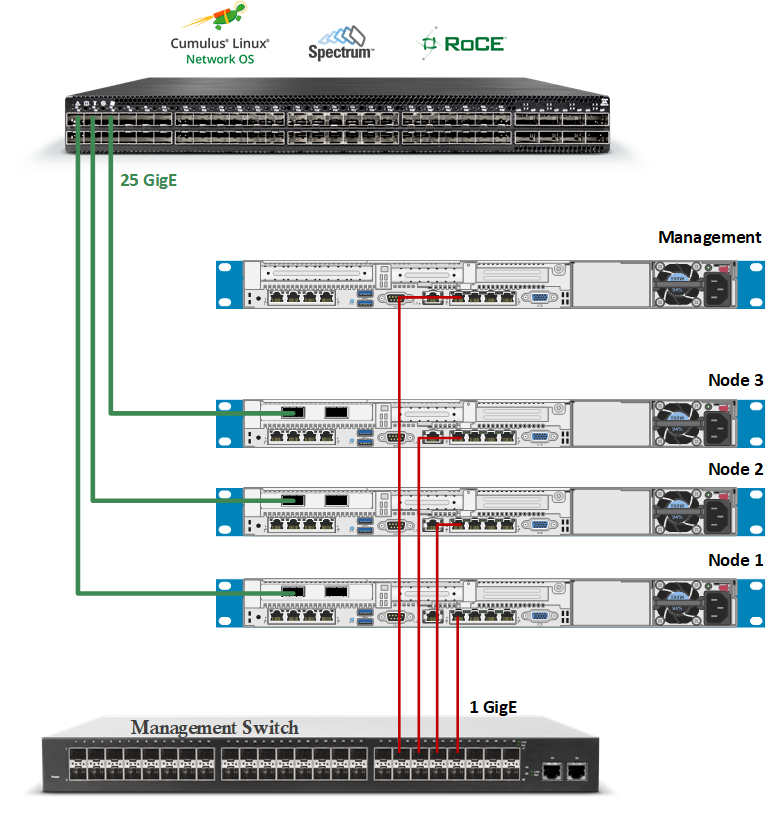 Below are the server names with their relevant network configurations:

RoCE transport is utilized to accelerate Spark networking through the UCX library. To get the highest possible results we will configure our network to be lossless.

Run the following commands to configure a lossless networks and for NVIDIA Cumulus version 4.1.1 and above:

Make sure Ubuntu Server 18.04 operating system is installed on all servers with OpenSSH server packages and create a non-root user account with sudo privileges without password.

Update the Ubuntu software packages and install the latest HWE kernel by running the below commands:

In this solution we added the following line to the EOF /etc/sudoers :

SR-IOV Configuration (on Worker Nodes only)

Verify that you are using SR-IOV supported server platform and review the BIOS settings in the hardware documentation to enable support for SR-IOV networking.

The Kubernetes cluster in this solution will be installed using Kubespray with a non-root user account from a Deployment Node(K8s Master Node).

Login to the Deployment Node as a deployment user (in this case - user) and create SSH private key for configuring the password-less authentication on your computer by running the following command:

Copy your SSH private key, such as ~/.ssh/id_rsa, to all nodes in your deployment by running the following command:

Install dependencies to run Kubespray with Ansible from the deployment Node:

The default folder for subsequent commands is ~/kubespray-2.13.3.

Review and change the host configuration file - inventory/mycluster/hosts.yaml. Below is an example output from this solution:

In “inventory/mycluster/group_vars/all.yml” uncomment the following line so that the metrics can receive data about cluster resources use.

In "inventory/mycluster/group_vars/k8s-cluster/k8s-cluster.yml" enable Multus installation by setting the variable kube_network_plugin_multus to true, and specify the Docker version by adding the variable"docker_version: 19.03" to avoid any related issues.

Example of a successful completion of the playbooks looks like:

The Kubernetes cluster deployment verification must be done from the K8s Master Node.

Execute the following command for copy Kubernetes cluster configuration files to a non-root user on the Master Node:

Verify that the Kubernetes cluster is installed properly. Execute the following commands:

The RoCE enhancement for the K8s cluster enables containerizing SR-IOV virtual functions in Pod deployments for additional RoCE enabled NIC's.
During the installation process, a role will use the Kubespray inventory/mycluster/hosts.yaml file for Kubernetes components deployment and provisioning.

The RoCE components are configured by a separate role in the installation. The RoCE role will install the following components:

Set the variables for the RoCE role in the yml file -  roles/roce_sriov/vars/main.yml.

Run the playbook from the Kubespray deployment folder using the following command:

The following is an example of a successful playbooks execution:

After the installation, the role with default variable parameters in your K8s cluster will have the following:

The role deployment verification must be done from the K8s Master node. Execute the following commands to initiate the verification process:

For this configuration, make sure to know your network interface name (for example ens3f0) and its parent NVIDIA Mellanox device (for example mlx5_0). To get this information, run the ibdev2netdev command:

The below listed software is required to install and run the GPUDirect RDMA:

After a successful installation:

Perftools is a collection of tests written over uverbs intended for use as a performance micro-benchmark. The tests may be used for HW or SW tuning as well as for functional testing. The collection contains a set of bandwidth and latency benchmarks such as: 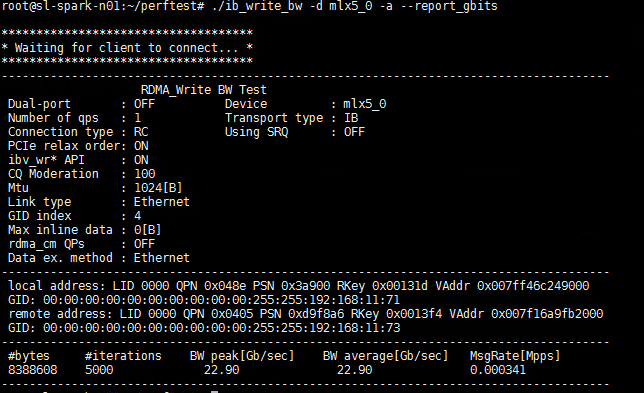 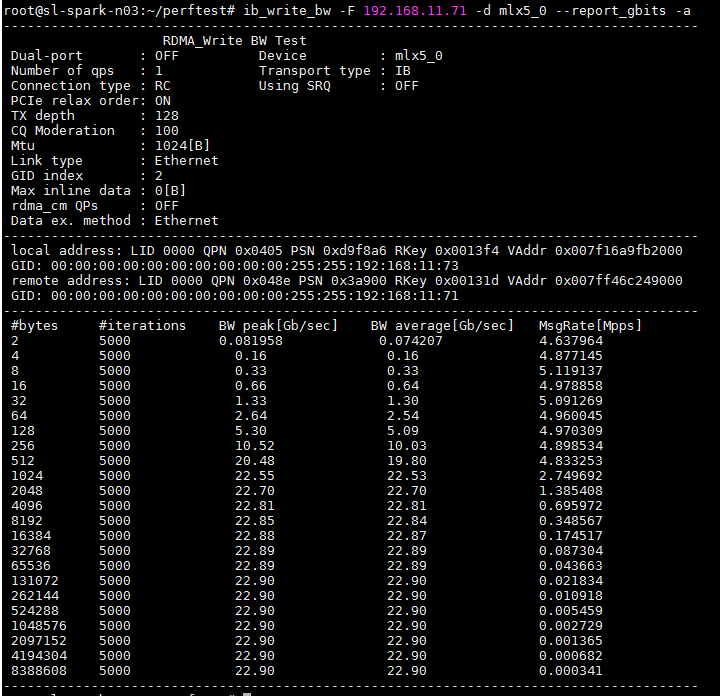 To prepare the TPCH application, download the generated dataset and run the following commands on the Worker Node or on a server with access to NFS share:

To run TPC-H application with RAPIDS you need the following jar file:

Put the jar file into the /opt/sparkRapidsPlugin directory on the Deployment Node together with Spark Rapids Plugin jar files.

Here you can find examples to run TPC-H application:

For TCP without GPU/RAPIDS/UCX running we are using the tpch-tcp-only.sh file with the following configs when running Spark on K8s.

For TCP with GPU/RAPIDS and without UCX running we are using the tpch-rapids-tcp-noucx.sh file with the following configs when running Spark on K8s.

For TCP with GPU/RAPIDS/UCX running we are using the tpch-rapids-tcp-ucx.sh file with the following configs when running Spark on K8s.

For RDMA/RC with GPU/RAPIDS/UCX  without GPUDirect running we are using the tpch-rapids-rc-ucx-nogdr.sh file with the following configs when running Spark on K8s.

For RDMA/RC with GPU/RAPIDS/UCX/GPUDirect running we are using the tpch-rapids-rc-ucx-gdr.sh file with the following configs when running Spark on K8s.

Archive of the RoCE role for deployment with Kubespray - roce.tar.

Tuning a Spark job configuration settings from the defaults can improve the job performance, and this remains true for jobs leveraging the RAPIDS Accelerator plugin for Apache Spark.
This document provides guidelines on how to tune a Spark job’s configuration settings for improved performance when using the RAPIDS Accelerator plugin.

Since the plugin runs without any API changes, the easiest way to see what is running on the GPU is to look at the "SQL" tab in the Spark Web UI. The SQL tab only shows up after you have actually executed a query. Go to the SQL tab in the UI, click on the query you are interested in and it shows a DAG picture with details. You can also scroll down and twist the "Details" section to see the text representation.

If you want to look at the Spark plan via the code you can use the explain() function call. For example: query.explain() will print the physical plan from Spark and you can see what nodes were replaced with GPU calls.

For now, the best way to debug is how you would normally do it on Spark. Look at the UI and log files to see what failed. If you got a seg fault from the GPU find the hs_err_pid.log file. To make sure your hs_err_pid.log file goes into the YARN application log, you may add in the config: --conf spark.executor.extraJavaOptions="-XX:ErrorFile=<LOG_DIR>/hs_err_pid_%p.log"

If you want to see why an operation didn’t run on the GPU, you can turn on the configuration: --conf spark.rapids.sql.explain=NOT_ON_GPU. A log message will then be output to the Driver log as to why a Spark operation isn’t able to run on the GPU.