Hybrid cloud has become the dominant architecture for enterprises seeking to extend their compute capabilities by using public clouds while maintaining on-premises clusters that are fully interoperable with their cloud service providers.

vSAN aggregates local, direct-attached storage devices to create and share a single storage pool across all hosts in the hyperconverged cluster, utilizing faster flash SSD for cache and inexpensive HDD to maximize capacity.

RDMA (Remote Direct Memory Access) is an innovative technology that boosts data communication performance and efficiency. RDMA makes data transfers more efficient and enables fast data move­ment between servers and storage without using the OS or burdening the server’s CPU. Throughput is increased, latency reduced and the CPU is freed to run applications.

For the last several years, VMware has been adding RDMA support to ESXi, including PVRDMA (paravirtual RDMA) to accelerate data transfers between virtual servers and iSER and NVMe-oF for remote storage acceleration.

VMware’s vSANoRDMA is now fully qualified and available as of the ESXi 7.0 U3d release, making it ready for deployments.

HCI Bench v2.6.1 VDBENCH will be used for benchmarks to show performance improvements between vSAN over RDMA and TCP protocols by using the same hardware.

The following hardware setup is utilized in the vSphere environment described in this guide. 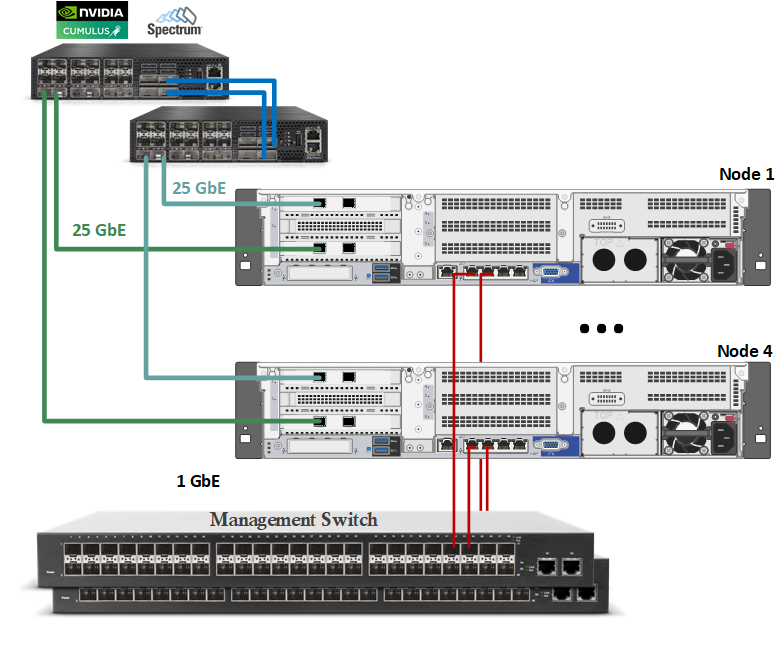 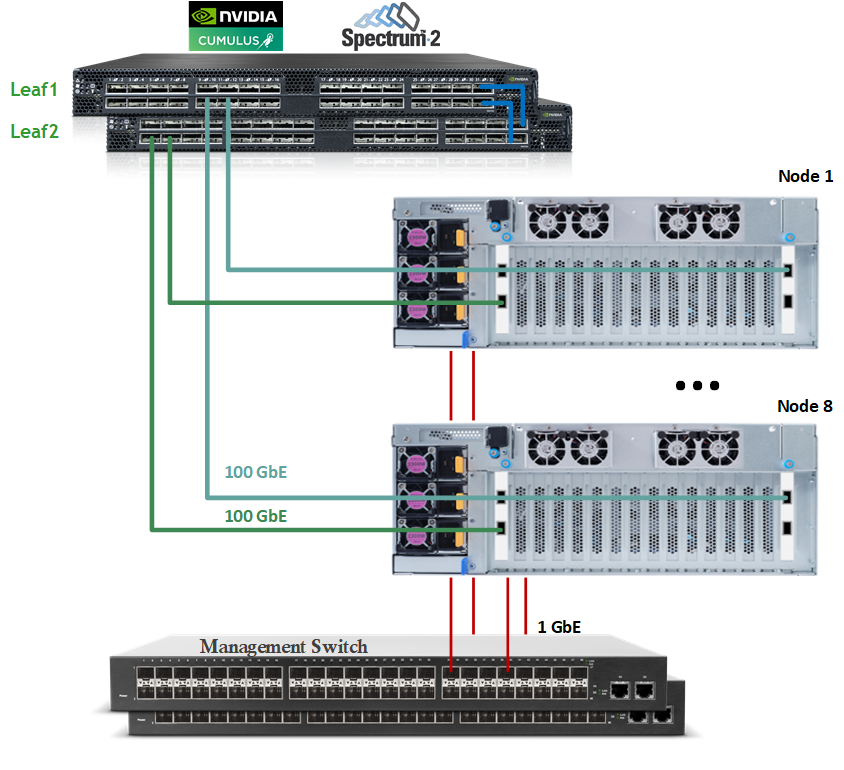 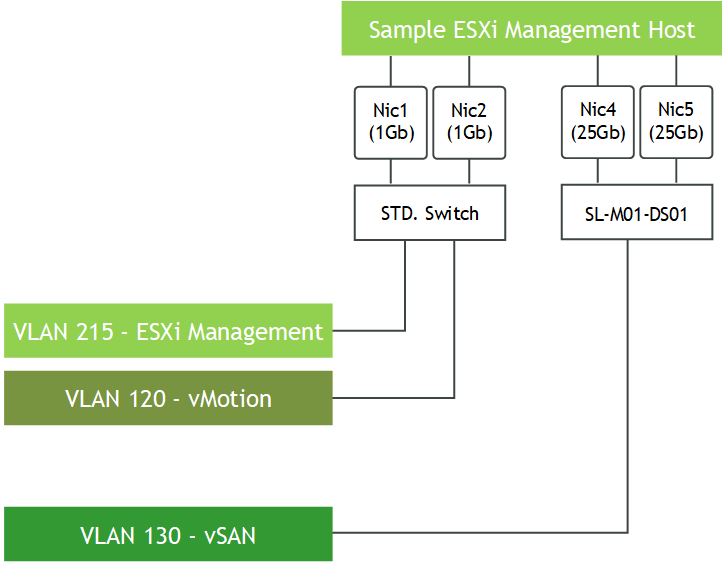 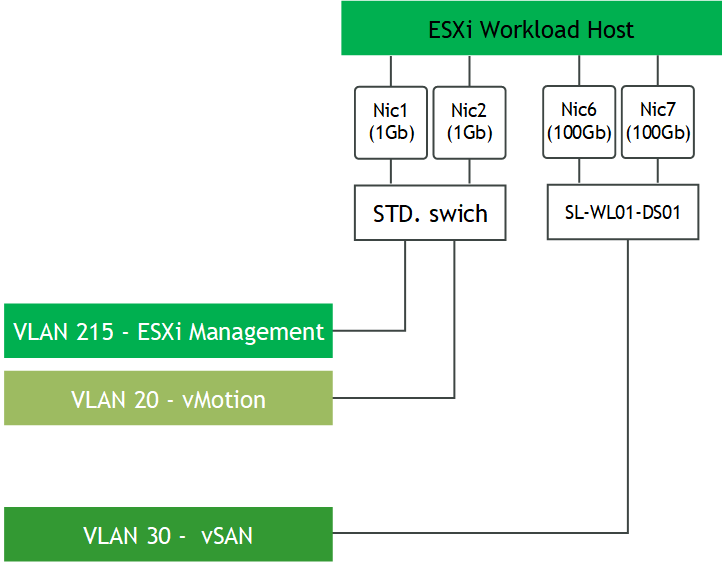 This table provides details of the ESXi server, switches and storage system names and their network configuration.

Run the following commands on both Leaf switches in the Management Cluster to configure port channel and VLAN.

Run the following commands on both Leaf switches in the Workload Cluster to configure port channel and VLAN.

Enable RDMA over Converged Ethernet Lossless (with PFC and ETS)

RoCE transport is utilized to accelerate vSAN networking. To get the highest possible results, the network is configured to be lossless.

Run the following commands on all Leaf switches to configure a lossless networks for NVIDIA Cumulus.

There are many considerations to be made from a requirements perspective when provisioning a VMware vSAN software-defined storage solution.

vSAN 7.0 Update 2 and above supports RDMA communication. To use it:

To create a vSAN cluster, create a vSphere host cluster and enable vSAN on the cluster.

To enable the exchange of data in the vSAN cluster, you must provide a VMkernel network adapter for vSAN traffic on each ESXi host.

Firstly, make sure to create a vSphere Distributed Switch (vDS) with a distributed port group on a vSphere cluster with one Active and Standby uplinks.

To create a new vDS:

To add an ESXi host to an existing vDS:

This section lists the steps required to create two distributed port groups with one Active and one Standby uplinks.

Adding a VMkernel Network for vSAN

To add VMkernel adapters for distributed port groups, follow the steps below.

Once the ESXi Cluster Networking configuration is complete, it can be verified under the Distributed Switch>Configure>Topology tab.

vSAN network is enabled for the host.

Use the HTML5-based vSphere Client to configure your vSAN cluster.

To enable and configure vSAN, follow the steps below.

You must assign a license to a vSAN cluster before its evaluation period or its currently assigned license expire.

To assign a license to a vSAN cluster, follow the steps below.

The HCI Bench used Random Read and Random Write IO patterns with various IO sizes from 4 KB to 1024 KB.
We compare the IOPS, Throughput and CPU usage between vSAN over RDMA and TCP on the cluster.
The benchmark runs had the virtual disks placed on:
Disk Group 1:

The benchmark results in this performance study show consistent supremacy of vSAN over RDMA protocol for all block sizes tested and shows that compared to vSAN over TCP.

vSAN over RDMA was able to deliver compared to vSAN over TCP for every IO size tested over NVIDIA® ConnectX®-6DX:

As result, vSAN over RDMA allows to run more VMs on the same hardware with more performance and lower latency.

Running vSAN over RoCE, which offloads the CPU from performing the data communication tasks, generates a significant performance boost that is critical in the new era of accelerated computing associated with a massive amount of data transfers.

It is expected that vSAN over RoCE will eventually replace vSAN over TCP and become the leading transport technology in vSphere-enabled data centers.