This is the user guide for VPI adapter cards based on the ConnectX-6 integrated circuit device. ConnectX-6 connectivity provides the highest performing low latency and most flexible interconnect solution for PCI Express Gen 3.0/4.0 servers used in enterprise datacenters and high-performance computing environments.

ConnectX-6 Virtual Protocol Interconnect® adapter cards provide up to two ports of 200Gb/s for InfiniBand and Ethernet connectivity, sub-600ns latency and 200 million messages per second, enabling the highest performance and most flexible solution for the most demanding High-Performance Computing (HPC), storage, and datacenter applications.

ConnectX-6 is a groundbreaking addition to the NVIDIA ConnectX series of industry-leading adapter cards. In addition to all the existing innovative features of past ConnectX versions, ConnectX-6 offers a number of enhancements that further improve the performance and scalability of datacenter applications. In addition, specific PCIe stand-up cards are available with a cold plate for insertion into liquid-cooled Intel® Server System D50TNP platforms.

Make sure to use a PCIe slot that is capable of supplying the required power and airflow to the ConnectX-6 as stated in Specifications. 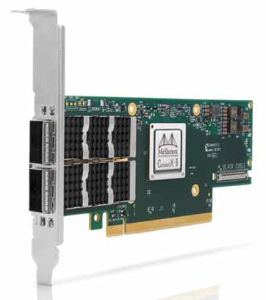 The below cards are available with a cold plate for insertion into liquid-cooled Intel® Server System D50TNP platforms. 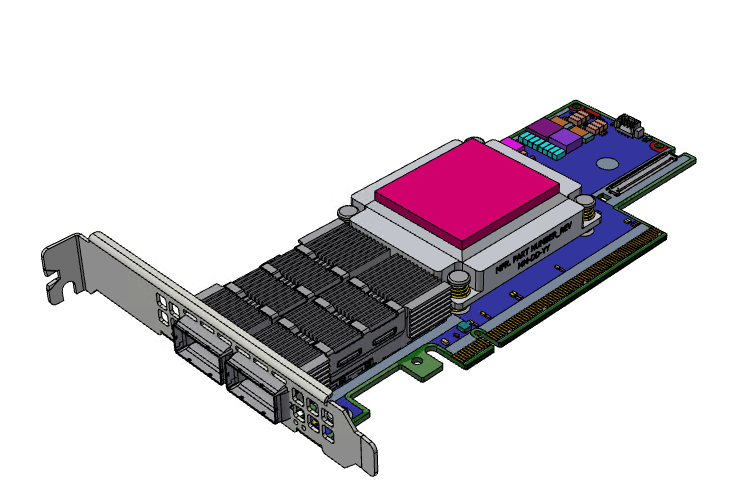 In order to obtain 200Gb/s speed, NVIDIA offers ConnectX-6 Socket Direct that enable 200Gb/s connectivity also for servers with PCIe Gen 3.0 capability. The adapter’s 32-lane PCIe bus is split into two 16-lane buses, with one bus accessible through a PCIe x16 edge connector and the other bus through an x16 Auxiliary PCIe Connection card. The two cards should be installed into two PCIe x16 slots and connected using two Cabline SA-II Plus harnesses, as shown in the below figure. 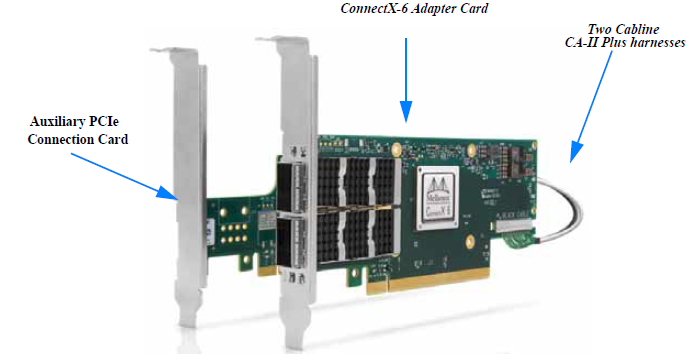 The PCIe x16 interface comprises two PCIe x8 in a row, such that each of the PCIe x8 lanes can be connected to a dedicated CPU in a dual-socket server. In such a configuration, Socket Direct brings lower latency and lower CPU utilization as the direct connection from each CPU to the network means the interconnect can bypass a QPI (UPI) and the other CPU, optimizing performance and improving latency. CPU utilization is improved as each CPU handles only its own traffic and not traffic from the other CPU. 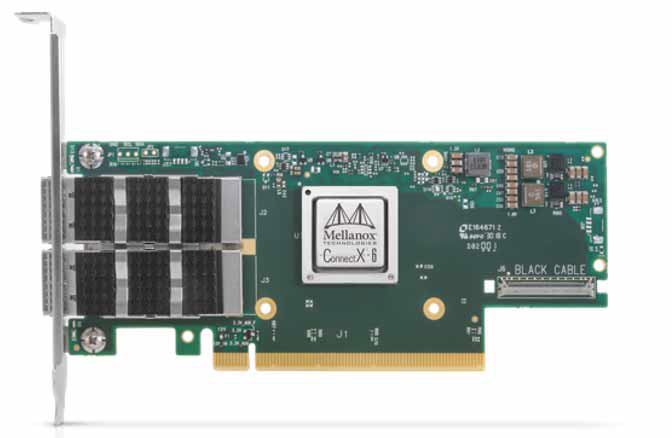 Make sure to use a PCIe slot that is capable of supplying the required power and airflow to the ConnectX-6 cards as stated in Specifications.

ConnectX-6 technology maintains support for manageability through a BMC. ConnectX-6 PCIe stand-up adapter can be connected to a BMC using MCTP over SMBus or MCTP over PCIe protocols as if it is a standard NVIDIA PCIe stand-up adapter. For configuring the adapter for the specific manageability solution in use by the server, please contact NVIDIA Support.