All NVIDIA network adapter cards are compatible with OpenFabrics-based RDMA protocols and software and are supported by major operating system distributions.

NVIDIA OFED is certified with the following products:

The figure below shows a diagram of the NVIDIA OFED stack, and how upper layer protocols (ULPs) interface with the hardware and with the kernel and userspace. The application level also shows the versatility of markets that NVIDIA OFED applies to. 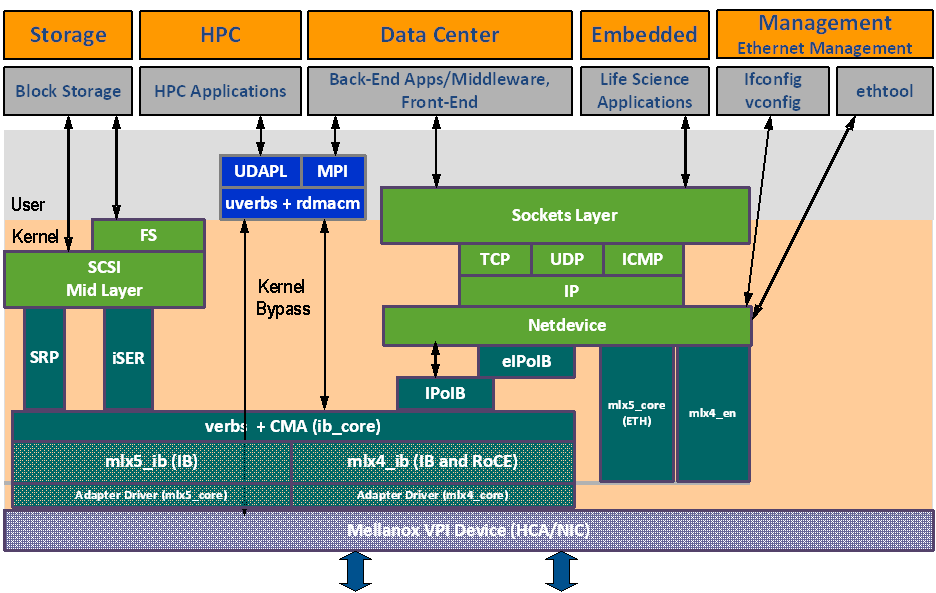 The following subsections briefly describe the various components of the NVIDIA OFED stack.

This driver is no longer supported in MLNX_OFED. To work with ConnectX-3 and ConnectX-3 Pro NICs, please refer to MLNX_OFED LTS version available on the web.

Please note that Connect-IB card is no longer supported in MLNX_OFED. To work with this card, please refer to MLNX_OFED LTS version available on the web.

Acts as a library of common functions (e.g. initializing the device after reset) required by ConnectX®-4 and above adapter cards. mlx5_core driver also implements the Ethernet interfaces for ConnectX®-4 and above. mlx5 drivers do not require the mlx5_en module as the Ethernet functionalities are built-in in the mlx5_core module.
mlx5_ib
Handles InfiniBand-specific functions and plugs into the InfiniBand mid layer.

libmlx5 is the provider library that implements hardware specific user-space functionality. If there is no compatibility between the firmware and the driver, the driver will not load and a message will be printed in the dmesg.
The following are the libmlx5 Legacy and RDMA-Core environment variables:

The following are libmlx5 Legacy only environment variables:

SCSI RDMA Protocol (SRP) is designed to take full advantage of the protocol offload and RDMA features provided by the InfiniBand architecture. SRP allows a large body of SCSI software to be readily used on InfiniBand architecture. The SRP driver—known as the SRP Initiator—differs from traditional low-level SCSI drivers in Linux. The SRP Initiator does not control a local HBA; instead, it controls a connection to an I/O controller—known as the SRP Target—to provide access to remote storage devices across an InfiniBand fabric. The SRP Target resides in an I/O unit and provides storage services. See “2019-09-16_14-14-40_.SRP—SCSI RDMA Protocol v4.5-1.0.1.0” section.

NVIDIA OFED includes the following two diagnostic packages for use by network and data center managers:

The NVIDIA Firmware Tools package is a set of firmware management tools for a single InfiniBand node. MFT can be used for:

MFT includes a set of tools used for performing firmware update and configuration, as well as debug and diagnostics, and provides MST service. For the full list of available tools within MFT, please refer to MFT documentation (https://docs.mellanox.com/category/mft).

NVIDIA OFED for Linux (MLNX_OFED_LINUX) is provided as ISO images or as a tarball, one per supported Linux distribution and CPU architecture, that includes source code and binary RPMs, firmware, utilities, and documentation. The ISO image contains an installation script (called mlnxofedinstall) that performs the necessary steps to accomplish the following:

MLNX_OFED includes the OFED source RPM packages used as a build platform for kernel code but does not include the sources of NVIDIA proprietary packages.