YOU ARE VIEWING AN OUTDATED DOCUMENT.

The NVIDIA® BlueField® DPU has several modes of operation:

This mode, known also as ECPF or DPU mode, is the default mode for BlueField DPU.

In ECPF mode, the NIC resources and functionality are owned and controlled by the embedded Arm subsystem. All network communication to the host flows through a virtual switch control plane hosted on the Arm cores, and only then proceeds to the x86 host. While working in this mode, the DPU is the trusted function managed by the data center and host administrator—to load network drivers, reset an interface, bring an interface up and down, update the firmware, and change the mode of operation on the DPU device.

A network function is still exposed to the host, but it has limited privileges. In particular: 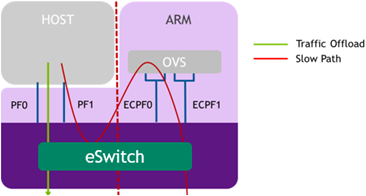 When the server and DPU are initiated, the networking to the host is blocked until the virtual switch on the DPU is loaded. Once it is loaded, traffic to the host is allowed by default.

To enable this mode:

Restricted mode is a specialization of Embedded mode and implements an additional layer of security where the host system administrator is prevented from accessing the DPU from the host. Once Restricted mode is enabled, the data center administrator should control the DPU entirely though the Arm cores and/or BMC connection instead of through the host.

For security and isolation purposes, it is possible to restrict the host from performing operations that can compromise the DPU. The following operations can be restricted individually when changing the DPU host to Restricted mode:

To disable host restriction set the mode to privileged mode:

If reverting from "rshim-disabled" mode, system power cycle is required.

In Separated mode, a network function is assigned to both the Arm cores and the x86 host cores. The ports/functions are symmetric in the sense that traffic is sent to both physical functions simultaneously. Each one of those functions has its own MAC address, which allows one to communicate with the other, and can send and receive Ethernet and RDMA over Converged Ethernet (RoCE) traffic. There is an equal bandwidth share between the two functions.

There is no dependency between the two functions. They can operate simultaneously or separately. The host can communicate with the embedded function as two separate hosts, each with its own MAC and IP addresses (configured as a standard interface).

In Separated mode, the host administrator is a trusted actor who can perform all configuration and management actions related to either network function. 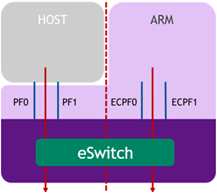 The limitations of this mode are as follows: