SFP (Small Form Factor Pluggable) – A transceiver or cable with a one or two lanes (channel) in each direction. All cables and transceivers commonly used in data-centers are bidirectional.

SFP+ denotes the 10 – 14 Gb/s type of AOC/transceivers, while SFP28 is the notation for the 25-28 Gb/s products with an SFP form factor. The noted data rate is the data rate in each direction.
SFP-DD, a double-density version of SFP, with 2 lanes in a form factor with same width as the SFP is defined, but are not part of Nvidia’s product portfolio at the time of release of this paper.
SFP transceivers are part of the Ethernet architecture, but not used in InfiniBand systems.

QSFP (Quad Small Form Factor Pluggable) – A bidirectional transceiver or cable with 4 lanes in each direction.

Standards: Electrical pinout, memory registers, and mechanical dimensions for both SFP and QSFP devices are defined in the public MSA (Multi-source Agreement) standards available at: www.snia.org/sff/specifications.

QSFP-DD refers to a double-density version of the QSFP transceiver supporting 200 GbE and 400 GbE Ethernet. It employs 8 lanes operating at up to 25Gb/s NRZ modulation or 50Gb/s PAM4 modulation. QSFP-DD cables will in general not work in standard QSFP cages, but switches/NICs with QSFP-DD cages may support the older QSFP transceivers/cables.

Transceiver or AOC? – You can argue that two transceivers connected with a patch cable replace an AOC. However, if you don’t have cleaning tools and experience with optical connectors, it is safer to use an AOC where the optical cable is fixed inside the ‘connector’. The AOC’s ‘connectors’ are actually similar to detachable transceivers, but they work as a kit with a well-known transceiver at the other end. AOCs don’t have any issue with multi-vendor interoperability. Nevertheless, it is easier to replace a pair of transceivers than an AOC since you don’t have to install a new cable as the cable is already in place.

DAC (Direct Attached Copper) cable or PCC (Passive Copper Cable) – A high-speed electrical cable with an SFP or QSFP connector in each end, but no active components in the RF connections. The term ‘passive’ means that there is no active processing of the electrical signal. The DACs still have an EEPROM, a memory chip in each end, so the host system can read which type of cable is plugged in, and how much attenuation it should expect.

OM2, OM3, OM4 (Optical Multi-mode) are classifications of MMF for different reach and speeds. Higher number indicates lower degradation of the optical signal, and longer reach. MMF cables commonly have the colors shown below, but standards are not fully consistent.

SMF (Single-Mode Fiber) – The type of fiber used for Indium Phosphide or Silicon Photonics based transceivers, operating at 1310 or 1550 nm wavelength. Single-mode fiber usually has a yellow jacket and can reach 100s of km. The tiny 7-9 µm light carrying core makes building single-mode optics much more expensive than multi-mode optics.

CWDM, WDM, DWDM, (Coarse Wavelength Division Multiplexing, Normal, Dense) – a technology for transmitting multiple optical signals through the same fiber. All signals have different wavelengths (colors). WDM transceivers make it possible to reduce the number of fibers in the link to two, one for transmit, and one for receive.

PSM4 (Parallel Single-Mode 4 fiber) is the opposite of WDM in the sense that each signal is transferred in its own fiber. This requires 4 fibers in each direction but enables simpler transceiver design since all signals can have same wavelength and no optical MUX/DeMUX (AWG) is required and no TEC (Thermo Electric Cooler) to stabilize the laser wavelengths. PSM4 is a MSA (Multi Source Agreement), i.e. a standard supported by a number of transceiver vendors.

Transceivers are classified with data- rate and reach, governed by the IEEE Ethernet standards. For 100 - 400 Gb/s transceivers the most common definitions are:

All 200/400 Gb links use PAM4 signaling which implies that Forward Error Correction (FEC) is required.

The interface types listed above are examples for 100, 200, and 400 GbE links. The IEEE 802 standards define a wide range of standards for different Physical Media Devices (PMDs), see https://en.wikipedia.org/wiki/Terabit_Ethernet#200G_port_types. and PMD Naming Conventions figure below. Some of the transceiver types are not IEEE standards but separate industry MSAs (Multi-Source Agreements) usually formed by a leading transceiver company. PSM4, SWDM4, CWDM4 and 400G FR4 are examples.

High-speed cables make use of edge ‘gold-finger’ connectors on the electrical side which attaches to the host system (switch, network card on server/storage). On the optical side, the following connector types are the most common:

MPO (Multi-fiber Push On), is a connector standard supporting multiple rows with up to 12 fibers in each. A QSFP transceiver with MPO receptacle uses the outermost 4 positions on each side. The center 4 positions are not used.

The optical port in the parallel 2 x 4-lane QSFP optical transceiver is a male MPO connector with alignment pins, mating with fiber-optic cables with female MPO connector. The connector contains a 12-channel MT ferrule (allows to bundle multiple channels into a single connector). 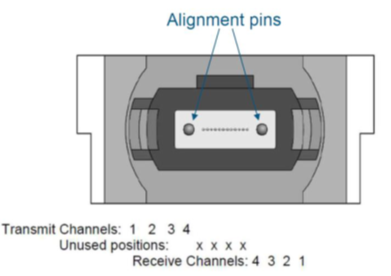 LC connectors are used for both single-mode and multi-mode fibers and are used in both SFP and QSFP MSA transceivers.

There are plenty of other optical connector standards. MPO and LC are commonly used for data center patch cables and transceivers.

The choice of Optical patch cable depends on the type of transceivers you need to connect.

While it used to be that longer-reach single-mode applications like 100GBASE-LR4 allowed for greater insertion loss, with less-expensive transceivers comes a reduced insertion loss allowance. Compared to the 6.3 dB allowed for 100GBASE-LR4 that supports 100 Gig up to 10 kilometers, we’re looking at just 3 dB for short-reach 100GBASE-DR applications up to 500 meters. So now just like 100 Gig multimode applications, designers need to be aware of their loss budgets, which could limit the number of connections in the channel.

With single-mode fiber and higher data rates, return loss is more of a concern. Too much light reflected back into the transmitter can cause bit errors and poor performance. The reflections can be significantly reduced by use of angled physical contact (APC) style connectors where an 8-degree angled end face causes reflected light to hit and be absorbed by the cladding.

About APC single-mode connectors, there’s more to know. When inspecting, you want to make sure to use an APC inspection probe tip designed to match the angle of the APC connector. This is required as part of the inspection equipment.

For APC connectors, you also want to make sure that the entire endface of the connector comes into contact with your cleaning apparatus. In other words, the cleaner must be aligned at the same 8-degree angle of the connector for proper cleaning.

While no damage will occur if you connect an APC connector to the input, you will get a warning about the received power being too low. To test APC systems, you will need two hybrid UPC-to-APC cords and two APC-to-APC cords to make the connection. For Tier 2 OTDR testing, since reflections when using APC connectors are absorbed by the cladding and return loss is very small, the OTDRs will show APC connections as a non-reflective loss like a good fiber splice.

For 200GBASE-DR4 and 400GBASE-DR4 short-reach singlemode applications, you’re also going to be dealing with MPO connectors as they require 8 fibers, with 4 sending and 4 receiving at 50 or 100 Gb/s. That’s where a tester like Fluke Networks’ MultiFiber Pro with a dedicated on-board MPO connector that can scan all fibers simultaneously is highly recommended to avoid time-consuming use of MPO to LC fan-out cords that separate the multiple fibers into single fiber channels. And if you do much work with MPO’s, a specialized inspection camera, such as our FI-3000 Fiber Inspector Pro, can be a real time-saver.  Of course, it comes with and APC MPO adapter.

And when testing singlemode fiber systems, you also want to make sure you’re testing at both the 1310 and 1550nm wavelengths. Not only if these two wavelenghts pass so will everything inbetween, but slight bends might not show up at the 1310nm wavelength

Use a patch cable with MPO connectors at both ends, and with crossed connections as shown below.

This is sometimes referred to as a ‘Type B cable’,
ref. https://www.flukenetworks.com/blog/cabling-chronicles/101-series-12-fiber-mpo-polarity

Multiple MPO patch cables can be connected in series, but each added connector pair increases modal dispersion in the link which again impairs performance. An odd number of ‘crosses’ must be used between transceivers at the two ends.

If two transceivers are to be directly connects, a “cross-over” fiber cable must be used to align the transmitters on one end to the receivers on the other end.

A QSFP port and transceiver contains four independent transmit/receive pairs. I.e. you can connect 4 servers with SFP cards/transceivers to a single QSFP port in a switch. This enables connection of four 10GbE NICs to one 40GbE port, or four 25GbE NICs to one 100GbE port.
In either case you need an MPO to four Duplex LC splitter (breakout) cable. Either multi-mode or single-mode optics can be used depending on the reach needed. 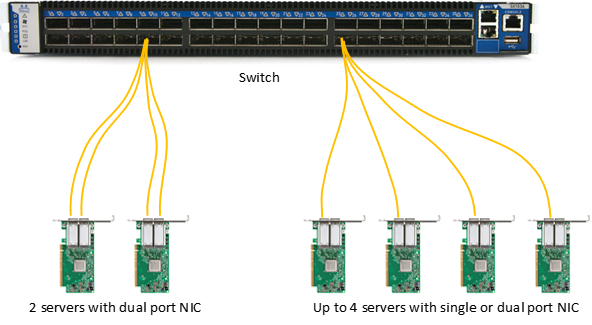 The QSFP ports of the switch must be configured to work in split mode, with the 4 lanes working in ‘split’ mode; that is, the lanes operate as independent channels instead of operating as a single logic port. This can be achieved with passive copper splitter cables (DACs) or with optical splitter cables. Switch ports (not NIC ports) can be configured to operate in split mode.

Optical transceivers for the optical solution are not shown in the figure above.

Note 2: The total number of ports that can be split with cables is based on the specific number of MACs inside the switch chip. See the switch documentation for specific configuration limits.

Optical splitter cables are available in the market for use between SR4 and SR transceivers. 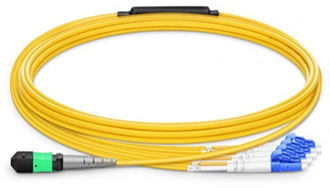 You cannot split the channels of a WDM transceiver using simple splitter cables. WDM transmitters use a single pair of fibers with the four channels carried on light of different wavelengths.

LinkX® is the product line brand for NVIDIA’s DAC, AOC and transceivers products that supports InfiniBand and Ethernet.

Ethernet (ETH) is a family of general computer networking technologies commonly used inside and outside datacenters. It comprises a wide number of standards, commonly referred to as IEEE 802.3, which is promoted by IEEE (www.ieee.org).

The main differences between the two protocols are as follows: